Born to a Bohemian village shoemaker, young Josef taught himself to paint. His bold lines and bright colors overcame the poor quality of paper and ink available in eastern Europe during the decades between the wars, and his bright scenes offered escape from those dark years with happy children and fairy tale landscapes. Lada’s art is a point of Czech pride; his illustrations are still reprinted each year on Christmas and Easter cards. 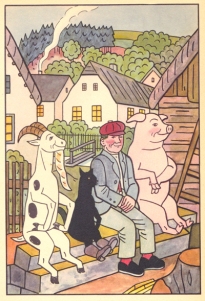 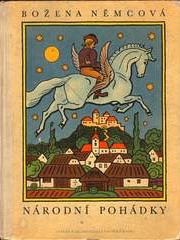 Mikeš, Nêmcová’s Fairy Tales of the Nation (of Czech-speaking peoples), and an unknown (to me) fairy tale illustration. Know a Czech writer? There is plenty of opportunity for Nêmcová or Erben translators.

One last treat, in case you missed it a few years back on Lada’s birthday: