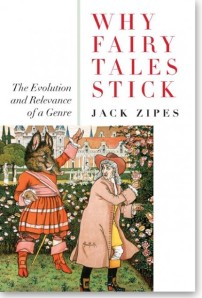 Retired professor of German and European Studies at U-Minn Jack Zipes is a translator and mediator of Fairy Tales, a purveyor of wonder and hope. Fairy Tales, he says, offer glimpses of how one may become master of one’s own fate.

When a storyteller does the scholarly detective work to draw parallels between story and social significance and grasps the metaphors, the tales work their magic. They begin “to awaken our regard for the miraculous condition of life and to evoke profound feelings of awe and respect for life as a miraculous process which can be altered or changed….”

Zipes, Jack, The Golden Age of Folk and Fairy Tales: From the Brothers Grimm to Andrew Lang. Hackett Publishing Co., 2013.